An act like the Milwaukee Dancing Grannies, who with their pom-poms, sense of humor and moxie have entertained crowds across the area for decades.

Funded in 1984, they usually performed 25 times a year, although they had to take a break in the earlier months of the pandemic.

“The Grannies are kind of a really tight unit,” said Beth Krohn, a retired member of the group. “We used to call it a sisterhood.”

On Sunday, the women were doing what they loved best: performing, providing entertainment and bringing joy to those gathered at the Waukesha Christmas Parade.

But in an instant, when a red SUV roared down the parade route, several of the Dancing Grannies were tragically run down, with four fatalities.

On Monday, police released the names of those killed, including Virginia Sorenson, 79, LeAnna Owen, 71, and Tamara Durand, 52, who were all part of the Dancing Grannies, and Wilhelm Hospel, 81, who helped the group.

A fifth person also died. Police identified her as Jane Kulich, 52. Kulich worked at Citizens Bank, which said in a statement that “one of our team members who was walking with the parade float was struck and passed away as a result of her injuries.”

“Our condolences go out to her family and friends for this inconceivable loss,” the bank said in its statement. “Please lift our team and the entire community as we all grieve.”

It’s hard to imagine, so close to Thanksgiving, the unparalleled grief visited on the families and friends of those who died. Each used their time and talent to help others in their own way.

Virginia Sorenson: Heart of the group

If the Milwaukee Dancing Grannies had a beating heart, it was Sorenson. Everyone called her Ginny.

She had a bad back and a bad hip but loved to dance and was an instructor and choreographer who helped newcomers and veterans with the group’s routines.

“What did she like about it? Everything,” said her husband of 56 years, David Sorenson. “She liked the instructing. She liked the dancing and the camaraderie of the women. She liked to perform.” 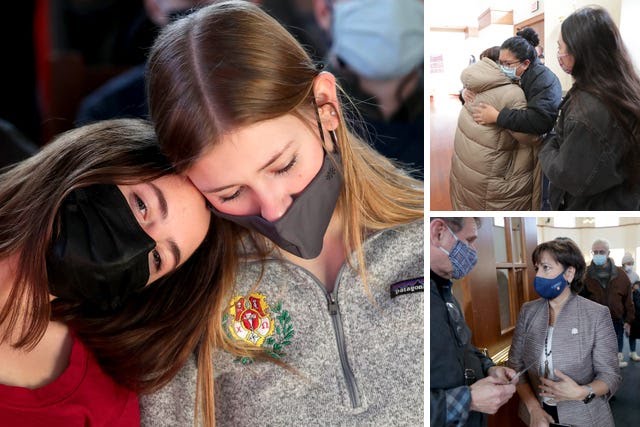 Sorenson, a 19-year veteran of the Dancing Grannies, was near the back of the group holding a banner when she was killed.

David Sorenson was at the parade Sunday, helping ferry the dancers from their parking spots at the finish to the start of the route.

He said Ginny “was going to ride in the van behind the women and be an instructor. They were short help so she offered to hold the banner going down the street. So she did that. I was at the end (of the parade route) in the car. I was sitting in the car waiting.”

The Sorensons lived a long and fulfilling life together, with three children and six grandchildren. They met decades ago at a church event.

“She taught me to do the Can-Can,” her husband said.

At their home in Muskego, she cared for animals, including two horses, chickens, dogs and cats.

A registered nurse, Ginny Sorenson still worked part-time in medical records. She used the extra money to pay for the horses and give treats to the grandchildren, her daughter Heather Sorenson said.

For the Sorensons, the Grannies were an activity for the entire family. Their grand kids often marched with the group and held the banner. The Sorensons also held frequent parties for the group, especially around Halloween. 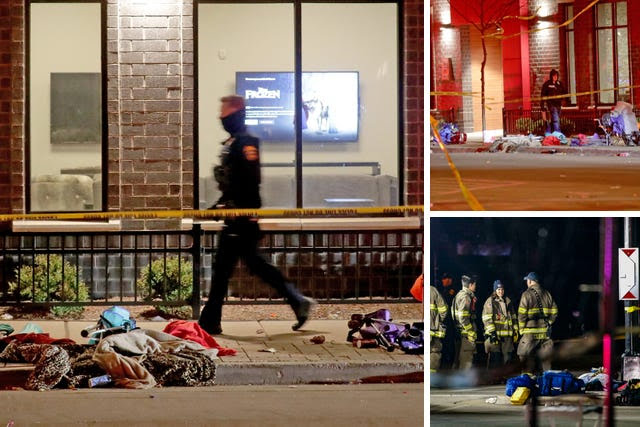 At the opposite end of experience on the Dancing Grannies was Durand, a young grandma who was “super excited” Sunday because she was going to make her debut with the group.

“She danced her way through life,” her husband David Durand said Monday. “She danced when there was no music. She always danced. That describes her personality.”

Besides dancing, Durand had a passion for her grandson, providing care for him four days a week so that her daughter could go to nursing school.

She volunteered for several years as a chaplain at Waukesha Memorial Hospital, according to her LinkedIn page and a 2019 church bulletin. The bulletin, from St. Jerome Parish in Oconomowoc, says she turned to work helping the sick and dying after converting to Catholicism.

Before that, she worked for more than 17 years as an elementary school teacher at the Beaver Dam Unified School District.

On Sunday, she posted a picture to her Facebook page, dressed in the blue and white outfit worn by Grannies and holding pom-poms. She wrote that it was her first Dancing Grannies parade.

Her death left her family heartbroken. “Everybody is pretty shocked,” her husband said.

Owen of Cudahy managed an apartment complex and was an enthusiastic member of the Dancing Grannies.

Owen was full of kindness for her tenants, said Dave Schmidt, who owns the two 32-unit buildings Owen managed.

“She didn’t have a mean bone in her body. She was the nicest lady,” Schmidt said.

Owen had managed the properties on South Packard Avenue for about 10 years. Before that, she lived at another property Schmidt’s family owned.

“She was the glue that kept that apartment complex running for us,” Schmidt said. “She will be sorely missed.”

Owen was focused on making sure tenants had a positive experience, Schmidt said. She knew, and had relationships with, every tenant.

The Dancing Grannies were an integral part of her identity.

“When she’d bring it up … she would just have this big smile on her face,” Schmidt said.

When a reporter from WDJT-TV (Channel 58) profiled the group in August, Owen’s interview was featured heavily.

“Can you keep up with the group?” reporter Winnie Dortch asked Owen, who was the smallest, shortest dancing granny of the crew.

Speaking in her sparkly red and white parade costume, Owen recalled a treasured moment when members of the group were recognized by children on a trip to Door County.

A whole bunch of them got up and came over and started talking to us, and it’s like, ‘Oh, we’re kind of like minor celebrities,’ ” Owen recounted to the reporter.

Hospel was a familiar presence among the Grannies. His wife, Lola, was one of the dancers, and he helped out, ferrying the dancers and making sure everyone had what they needed.

Jim Ray, who identified himself on Facebook as a co-worker of Lola, wrote Monday that he was “absolutely heartbroken.” Another man, Todd Heeter, wrote that Hospel was his former landlord. Heeter said he was at a loss for words after hearing the news that Hospel, who he described as “81 years young,” was dead.

An online fundraiser for Kulich’s family, verified by a GoFundMe spokesperson, called Kulich “loving, beautiful and charismatic mother, grandmother and friend to so many.”

“The world is a much darker place without a woman like this in the world,” the GoFundMe page reads.

According to her LinkedIn page, Kulich described herself as “a very hard worker who enjoys helping others” with “awesome customer service skills.”

She had worked at Citizens Bank as a teller since November of 2020.

Prior to that, Kulich was a caregiver for Visiting Angels, worked as server at Dave’s Family restaurant for nearly four years and worked as a production assistant at Klinke Cleaners for two and a half years.

Kulich had studied medical billing and coding at West Allis’ now-closed Sanford Brown College and she listed the following as causes she cared about: animal welfare, children and human rights.

In a Facebook post, Kulich’s daughter, Taylor Smith, wrote this tribute: “There’s no words. It’s so unreal. My mom was killed last night. We are told she didn’t suffer. Thank God. I’m so grateful I got to have her this long, but damn. She was walking in the parade last night. She was so happy. I love you mom. Rest in peace my beautiful angel.”

On Monday, the Waukesha community was in deep mourning as people tried to come to terms with the deaths, the injuries, the trauma. It was the kind of event that ripples out into southeast Wisconsin and across the country.

And it will never make sense.

In a post shared on Facebook, the Grannies said: “Our group was doing what they loved, performing in front of crowds in a parade putting smiles on faces of all ages, filling them with joy and happiness.

“While performing the grannies enjoyed hearing the crowds cheers and applause which certainly brought smiles to their faces and warmed their hearts.”