A child has died after a man allegedly rammed his SUV through a Christmas parade in Waukesha, Wisconsin, bringing the death toll to six, according to prosecutors Tuesday.

The child was one of 16 children admitted to the Children’s Hospital of Wisconsin, facility officials said in a news release.
“With deepest sympathy and sorrow, Children’s Wisconsin shares that earlier Tuesday, a child being cared for at Children’s Wisconsin passed away from injuries sustained at the Waukesha parade. As family and friends learn of this loss and the name of the child is likely to become public, the child’s parents have asked that their privacy be respected. They do not wish to be contacted by media at this time,” the release said.
Two children were able to go home Monday, the release said. A total of 13 children remain hospitalized, with six in critical condition three in fair condition and four in good condition, the release said.
The latest death comes as Darrell E. Brooks, 39, was officially charged Tuesday with five counts of first-degree intentional homicide, according to the Waukesha County District Attorney’s Office. Prosecutors said they will consider a sixth homicide charge, due to the child’s death.
Brooks made his first court appearance to face charges Tuesday. The judge set his bail at $5 million. Brooks was arrested Sunday after police said he barreled into the Waukesha Christmas parade Sunday.
Along with the six deaths, a total of 62 injured, according to charging documents. At least 18 children were also included in the number of people injured.
If convicted, Brooks faces life in prison for all five charges, the charging document states. Brooks’ bail was set at $5 million because the judge said he believed Brooks was a flight risk.
While police said they don’t believe the tragedy was an act of terrorism, new questions have emerged.

The motive remains a mystery

Brooks was involved in a domestic disturbance with another person just before plowing his SUV through the parade, Waukesha Police Chief Dan Thompson said.

He said police weren’t able to respond to the domestic disturbance call because reports from the parade tragedy came flooding in shortly afterward.
Early indications were that Brooks was fleeing the initial incident, according to multiple law enforcement sources familiar with the preliminary investigation findings.
But there was no police chase of Brooks leading up to the parade, Thompson said. He said the motive for why he crashed into the crowd remains unclear.
According to a criminal complaint describing the incident, three different officers with the Waukesha Police Department attempted to stop Brooks as he was driving.
The first officer, identified in the complaint as Detective Casey, saw people jumping out of the way of the red Ford Escape. Casey stepped in front of the SUV, the complaint reads, and yelled at the driver to stop multiple times. At this point, the vehicle had been going “at a slow speed,” brushed Casey as he stepped to the driver’s side door continuously yelling and continued toward the parade at a faster rate of speed. 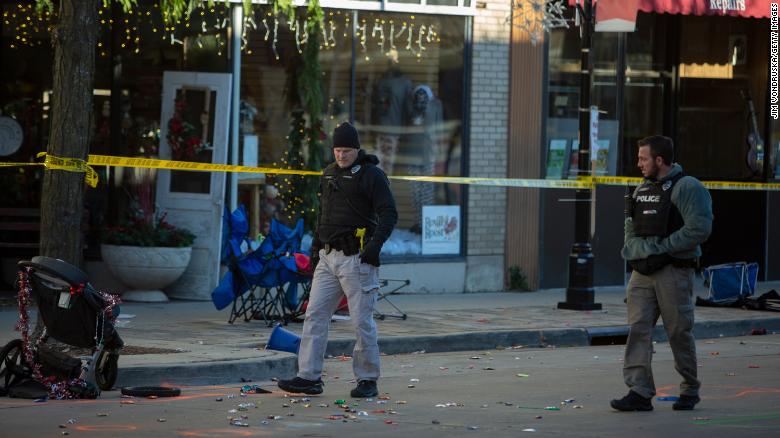 Police canvas debris left following a driver plowing into the Christmas parade on November 22, 2021, in Waukesha, Wisconsin.
Butryn also saw “bodies and objects” flying as the vehicle drove through and he continued running after it.
Officer Scholten saw the vehicle plowing through crowds as well, and shot at the vehicle three times.
Both Casey and Butryn saw multiple fatalities and injuries, the complaint said.
Casey saw three of the victims die at the scene. The other two were taken to local hospitals where they died, the complaint said. Doctors from the Waukesha County Medical Examiner’s Office concluded the victims’ cause of death to be “multiple blunt force injuries,” the complaint said.

The suspect was out on bond for a questionable amount

Brooks was released from jail less than two weeks ago after allegedly using a vehicle to run over a woman who said she was the mother of his child, court documents show. 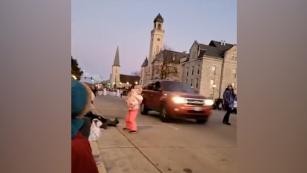 “The bail recommendation in this case is not consistent with the approach of the Milwaukee County District Attorney’s Office toward matters involving violent crime, nor was it consistent with the risk assessment of the defendant prior to setting of bail,” the DA’s office said.
“This office is currently conducting an internal review of the decision to make the recent bail recommendation in this matter in order to determine the appropriate next steps.”
Brooks was also charged with bail jumping because he was already out on bail following a July 2020 incident in which he was charged with two counts of second-degree reckless endangering safety with use of a dangerous weapon and one count of possession of a firearm by a felon, according to court documents.
CNN reached out to Brooks’ attorney from the 2020 and earlier November 2021 incident about the DA statement but has not yet received a response.

The suspect is also a registered sex offender

Questions about why Brooks was released on $1,000 bond came as news emerged about Brooks’ criminal record in Nevada.
Brooks pleaded guilty to statutory sexual seduction in November 2006, according to court and inmate records.
The suspect in the Waukesha parade tragedy was out on bond after allegedly running over a woman earlier this month
Additional details about the case were not immediately available. CNN has been unable to identify Brooks’ lawyer for this case.
According to the inmate records, Brooks served his sentence in the Northern Nevada Correctional Center from March 2007 to September 2008.
The Nevada sex offender registry shows Brooks is a registered sex offender in that state.
Brooks also has an outstanding arrest warrant in Nevada in an unrelated case for which he was arrested and jumped bail, authorities said.
The warrant was issued on August 15, 2016, for jumping bail, said Sarah Johns, Washoe County Sheriff’s Office spokesperson.
Johns said detectives later determined Brooks was in Wisconsin. “However, detectives did not have viable intelligence on Brooks’ exact location.”
CNN has reached out to a previous attorney for Brooks, but has not received a response. 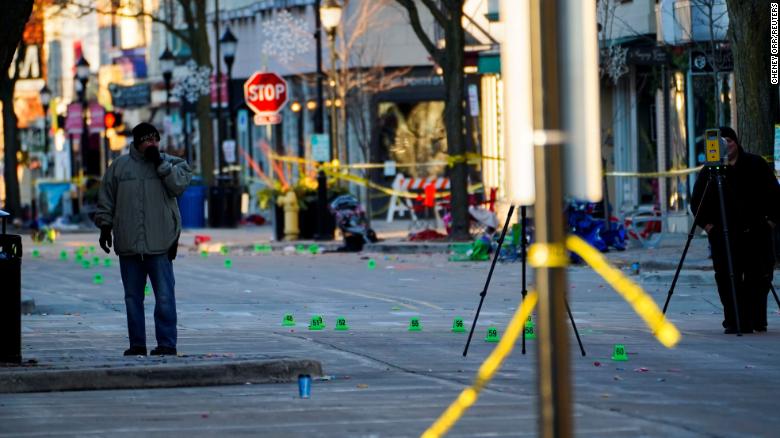 Police document evidence on Waukesha’s Main Street after an SUV slammed into a parade Sunday.

Victims are still being treated at hospitals

While Waukesha mourns the five people killed during the parade, dozens of people are trying to recover from their injures.
Authorities identified five of the six people killed as Virginia Sorenson, 79; LeAnna Owen, 71; Tamara Durand, 52; Jane Kulich, 52; and Wilhelm Hospel, 81.
Milwaukee Dancing Grannies have long brought joy to parades. Now they grieve after Wisconsin incident
Many of the victims injured in the incident were transported to area hospitals, and some were still being treated as of late Monday.
Five dancers who were injured remain in the ICU, the Waukesha Xtreme Dance Team said in a statement on their Facebook page Tuesday.
Eighteen children, ranging in ages 3 to 16, were transported to Children’s Wisconsin Hospital, according to Dr. Amy Drendel, director of the hospital’s emergency department and trauma center.
“Injuries ranged from facial abrasions to broken bones to serious head injuries. Six of these patients were sent to the operating room last night and two additional patients are undergoing surgeries today,” Drendel said at a press conference Monday.
Two children were discharged from the hospital as of Monday, according to Dr. Michael Meyer, medical director for the hospital’s pediatric intensive care unit.
Froedtert Hospital in Milwaukee received seven patients from the parade, according to hospital spokesperson Nalissa Wienke, and their statuses have not been released. Froedtert is the only Level I trauma center in southeast Wisconsin, typically used to provide care for the most critically ill patients.
Four people were admitted to ProHealth Waukesha Memorial Hospital. Three have been discharged, and one was in stable condition as of Monday night, the hospital said.
As the community grieves, the local school district canceled classes Tuesday and said students would return after the Thanksgiving break.